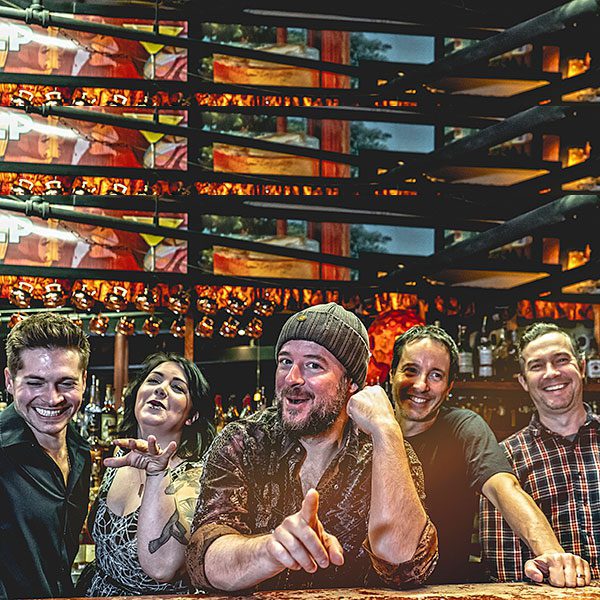 Yonder Mountain String Band is one of the most influential acts on the acoustic music scene. Pioneers of the Jamgrass movement, Yonder Mountain is known for their ability to channel a wide variety of musical styles. The acoustic lineup just happens to be the vehicle they’ve chosen to haul their many influences ranging from punk rock to the Grateful Dead. With a willingness to try new things and do what the music demands, Yonder Mountain continues to expand the traditional genre beyond all established boundaries and into the realms of rock n roll and improvisation.

Notorious for their wild live shows, choice cover tunes, and lengthy onstage experimentations, Yonder Mountain String Band earned an especially loyal audience on the jam band circuit. With a large following of fans known as “Kinfolk” traversing the country with them, taping their shows and trading their music, the band gained momentum and found themselves playing to sold out crowds in iconic venues such as Red Rocks, The Fillmore San Francisco, The Warfield Auditorium, and esteemed festivals such as The Telluride Bluegrass Festival, Bonarroo, High Sierra, Fuji Rock Festival, Summer Camp and Delfest, to name a few. Yonder Mountain also partnered with promoters to curate their own festivals: Northwest String Summit (Oregon), Kinfolk Celebration (Colorado), Yonder Mountain Harvest Festival (Arkansas) and Strings and Sol (Mexico) Yonder Mountain has shared the stage with well-known bluegrass musicians like Del McCoury, Jerry Douglas, Sam Bush and Bela Fleck, as well as with members of jam band icons Phish, Widespread Panic and The Grateful Dead. In 2008 they even shared a stage with Barack Obama at the Democratic National Convention.

The band has released 7 studio Albums and 6 live albums on their own Frog Pad Records Label. This past September, 2019 marked the 20th Anniversary of Yonder Mountain’s critically acclaimed debut album, Elevation. Out of print for years and considered by decades-long fans to be the band’s career defining album, the band celebrated this milestone with a 20th anniversary 180g double vinyl re-release. YMSB’s Elevation broke past traditional bluegrass music boundaries, opening the door for acceptance of the next generation’s take on a new style that audiences would fully embrace. Founding Members Adam Aijala, Ben Kaufmann, David Johnston and Allie Kral, who became an official member in 2015 are now joined by multi-instrumentalist Nick Piccininni. The live show will undoubtedly be right in line with what you’d expect from Yonder Mountain String Band: heart-felt, edgy and genre-defying music.