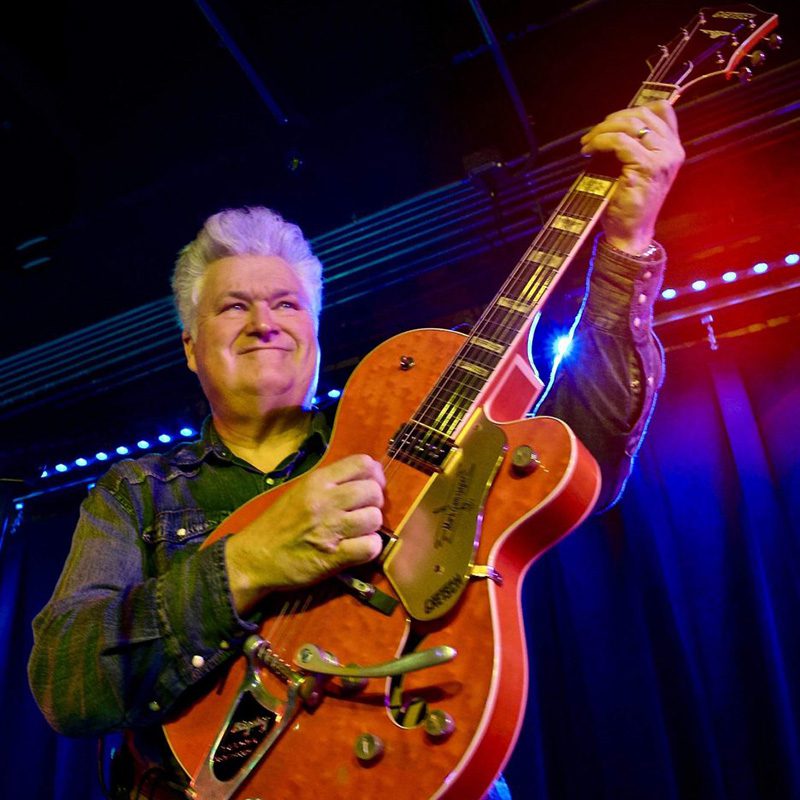 You can do anything, but don’t step on my blue suede shoes! Grey Fox is thrilled to welcome back Mark Gamsjager and The Lustre Kings, where they’ll be rockin’ and rollin’ at the Catskill Dance Stage Saturday evening. The band boasts a devoted international fanbase, performing over 150 dates a year, including regular stops at nightspots, casinos, and festivals such as Viva Las Vegas, Heritage Folk Festival and the Rockin 50s Fest. A Gretsch Guitars endorsee, Gamsjager has taught for the National Guitar Workshop and has guested at iconic venues ranging from Kennedy Center to the Montreal Jazz Fest.

Beginning with 1995’s Mark Gamsjager Rocks & The Lustre Kings Roll, the band staked a claim to a modern take on the reverb-driven sounds of early rock, leaning also on touchstones of country, blues and R&B. When the famed “Queen of Rock,” Wanda Jackson, heard the authenticity in The Lustre Kings, she hired Gamsjager and the group as her backing unit for many tours. “I have worked with many bands around the world,” Jackson says, “and none are better than Mark Gamsjager and The Lustre Kings… They rock!!”

Like so many good things in life, it’s Chuck Berry’s fault. When young Mark Gamsjager heard the master’s incredible dexterity, invention and six-string swagger, he knew things would never be the same. The Shakespeare of Rock and Roll (Johnny B. Goode, Maybelline, 30 Days) left his mark in a deep way, as did Elvis Presley, Bill Haley, Chet Atkins, and jazzman Charlie Byrd on Mark’s journey to guitar greatness. Even as a teenager, Gamsjager realized that fancy pickin’ and sassy singin’ wasn’t enough. You had to entertain to hold an audience. Since those early days, Mark Gamsjager — hair pomped high, a wiggle in the shoulders and a wink in the eye — has been an entertainer through and through.